Dear Friends, Family, Supporters, Partners, and Prayer Warriors,
Please take a moment and look at this picture that was taken sometime in January 2015. This picture was taken 5 years ago with my “level 5” class at our English language school called Grace Language School (GLS) where we have the privilege of serving as Founder, Director, and Teacher of this awesome school.

When I look at this picture, I am reminded of several very important things that we want to share with you today.
The first thing that we want to say is that when this picture was taken 5 years ago, I was the only follower of Jesus in that room on that day. I was there in my role and in my vocation as an English Teacher. I have not always been an English teacher but God has convinced me over the last 20+ years that one of the ways I can join God in what He is doing among the least reached people groups in our world today is to be willing to teach English with the best of my ability and with intentionally seasoning my words so that trust is built and I am allowed to be the salt and light of Christ and help direct conversations  in the direction of spiritual things.
You see God wants to use ordinary people like you and me to join Him in His great work of reaching the Lost, especially the “Panta Ta Ethnae” (“all the people groups” in every nation) that Jesus referred to in His Great Commission. God wants us to go into the world with the greatest message that can ever be told. Please take a moment and watch this short clip “Go into the world.”
You have to understand, we live in Northern Thailand which is a place in God’s world where only 1 person out of every 100 persons know Jesus as their personal Savior. We live in a country that is made up of almost 70 million people. All of these people are Thai citizens but that does not mean they all speak the same language. No, as a matter of fact, according to Joshua Project, there are 113 different language/people groups living in Thailand. Some of these people groups are made up of millions of people and are some of the largest unreached people groups in our world today.
I didn’t really know it on the day this picture was taken, but God was at work in a mighty way in the lives of at least two of the four students in that classroom. God was using many different people (including some former colleagues Josh and Jessie Grammer and many others), some through our language school and others not related to our language school at all. God was using all of us to play a part in helping two of these four university students take steps closer to Christ.

Little did I know that 5 months after this picture was taken, that the young man sitting on my right in the picture – Nong Ball – would give his heart to Jesus and become the first person in his entire family to become a follower of Jesus.
Not only that, out of the 100+ people groups that make up the people of Thailand, Nong Ball is from the 3 largest Unreached People Group (UPG) – The Khon Muang or Northern Thai. This UPG is made up of about 7 million people mostly living in Northern Thailand but some also in Laos and in Burma and possibly in Southern China.
Since Ball graduated from Rajabhat University over a year ago, God led us to bring him on staff with us and he has been serving in many different roles and has been growing deeply in his walk with our great Savior. He is learning how to serve the Lord with all his heart and we are very glad to have him as part of our team. Here is a short video clip of Nong Ball’s baptism on September 13, 2015.
Not only was God at work in Nong Ball’s life when this picture was taken, but God was at work in the life of another university student that was sitting on my left.

About 7 months after this picture was taken, the young lady that was sitting on my left – Nong Nok – gave her heart to Jesus and become the first person in her entire family to become a follower of Jesus. Similar to Nong Ball, out of the 100+ people groups that make up the people of Thailand, Nong Nok is from another unreached people group called the Lu Mien or the Yao. This UPG is made up of about 1.6 million people primarily located in China, Vietnam, Laos, and Thailand.
Nong Nok has since graduated from Rajabhat University and became a teacher and last year spent her first year after graduation teaching at the school she went to as a child in her home village. She is now teaching in a school in the Chiang Saen area about 1 hour from where we live. She is continuing to grow in her relationship with the Lord and is active in sharing her faith with her family, and with her students and with those around her. Today – April 28 -  is her birthday. Happy Birthday Nok!!!!

God is using Grace Language School in a very powerful way to truly reach into some of the least reached people groups in our world today and to make an impact in the lives of young people especially those studying at one of the two universities that are near our work.
Please remember to pray for us and for our team as we seek to be used by God in greater ways in the days ahead and pray for all the Thai and international students that we come in contact with that their hearts will be open to hear the greatest message which is “good news for all the people.” 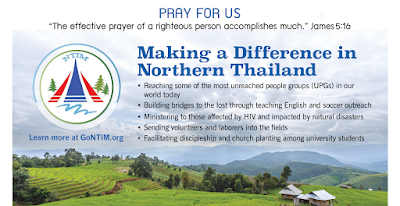 Until the People in and around Northern Thailand know Him,
Michael for the team
“For we do not preach ourselves but Christ Jesus as Lord, and ourselves as your bond-servants for Jesus’ sake.” 2 Corinthians 4:5
-----------------------------------------------------------
Financial support can be given through NTIM....
Northern Thailand Impact Ministry (NTIM), P.O. Box 26115, Birmingham, AL 35260 USA Main Website: www.gontim.org
NTIM is a non-profit 501(c)(3) charitable organization based in the USA. We are committed to connecting people in need with people who care and are focused in the heart of Southeast Asia where poverty is high, education is low, needs are great, unreached people groups (UPGs) are all around us, and the love and message of Jesus is needed to transform lives.
Reaching, Teaching, Caring, Discipling, Equipping, Training, and Serving People in God’s world through acts of love and compassionate is what NTIM and our ministry team is all about.